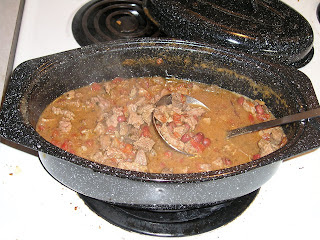 Earlier this week I cooked 1 pound of Red Beans in two different pots with my panel and steel bowl cookers.
Yesterday, I wanted to make chili with part of those beans, but the day was really hazy. UV predictions were 9-10, but I'm guessing it was more like an 8.
So I put the beans straight from the fridge into the oblong granite pot, room temperature canned tomatoes, seasonings and a couple of beef bullion cubes. As I stepped outside to set up the panel cooker, I realized just how hazy it was. So, I thought I would experiment with the reduced UV.
I set the pot down on the ground to finesse the panel cooker, and in only a couple of minutes the lid was hot to the touch! I knew I could still cook.
I waited until the ingredients were 150F before adding the beef. I cubed it really small so that it would cook faster at the lower temps. I stirred the beef in making certain that all the meat had been nestled into the hot broth... again... Safe Food Handling Tyrant wanted to make certain that the beef got to 150 immediately.
I repositioned the cooker (as best as I could without much shadow), and at the end of 3.5 hours, I brought the pot in. It was still at 150F, which is 10 degrees above safe food holding temperature, but not hot enough to melt cheese. So, I set the pot on a burner for 5-7 minutes to come to boiling temp.
Added a handful of corn tortilla chips, cheese on top- Yummmy dinner!
Chili Recipe:
2 cups of beans in their own broth (this time I used Red beans, normally I use Pintos)
2 pounds (2 cups) of beef- cubed stew meat or ground beef
1 14oz can of HEB Chipoltle seasoned Tomatoes, about 1/4 cup of water to rinse can into pot.
2 teaspoons of dried onion flakes & cumin
1/2 teaspoon of garlic powder & dried cilantro
2 beef bullion cubes
General Notes:
Normally, I would use store bought beef broth, but with the reduced sun and lower temps, this would not be loosing any moisture to steam, and I didn't want this too soupy.
I did NOT salt this, nor did I add any pepper. The tomatoes were pretty spicy, and the chipoltle seasoning on the bacon inside the beans added some spice. The bullion cubes and the salted beans added enough sodium to this dish.
Set pot of veges out in sun until they are 150F, then add meat.
Cook for 3+ hours to blend the seasonings and cook the meat.
Posted by ARNie at 6:38 AM

I always cook my meat separately before adding to chili or soups, this way, you don't have to feel uneasy. I put one pot of the beans, etc, then the other pot with meat. You can visually see how the meat is coming along, then when both are good and hot, meat cooking right along, you combine the two and let finish.

Nathan Here,
I have to affirm solcarcookingnut's process, I too will usually cook my meat in a second solar cooker to make sure the meat is cooked well enough,especially in the "shorter days" period of the year.
And I do it for convenience and to save time cooking.

The chili looks good.
I will stick it on my site.
Nathan
http://www.solarcooker-at-cantinawest.com