Baking in a Solar Oven

This article is taken from the booklet: Solar Cooking by Angela ‘ARNie’ Grabowski order your copy here- http://chezcrochet.com/page92.html

AN OVEN THERMOMETER IS A MUST. You will toss more attempts in the trash, if you try to bake with temperatures that are too low.

I don’t recommend putting an air-tight lid on baked goods, since the moisture escaping from the recipe really needs to move away from the batter, instead of being trapped on top of it.

Smaller recipes are better suited for solar cooking- no more than 2 cups of flour or dry ingredients for a coffee cake, ginger bread, brownie, or corn bread recipe.

Solar Cooking is well suited for Whole Wheat flours, since solar cooking requires longer cooking times, the flours get the toasting they need to taste wonderful.

After 1 hour in the solar oven, or when the quick bread is firm to the touch, you might want to put a Black Lid on your brownies to prevent over browning on top. The Black lid will help protect the top surface, but still delivers heat to the top of the recipe to help its continued cooking.

The Clean Knife/Toothpick trick simply hasn’t worked for me. I’ve had numerous recipes where the toothpick was clean, but the interior of the batter was still ‘gooey’ or doughy. Put your quick bread in the solar oven after it has reached 250F empty, then leave it for at least two hours.

For me, dried fruits have worked better, than fresh or frozen or canned. The added moisture from the fruit cannot evaporate at the lower temperatures, and makes for a gooey cake, no mater how long it cooks.

Finally, I have had much better luck with parchment paper, than cooking spray to prevent sticking. The bottom of the recipe won’t get quite as browned, but at least it won’t, stick to the pan.
Copyright Angela 'ARNie' Grabowski 2009

More Tips for Baking with a Solar Oven

This is adequate heat to bake with, but will at least double the required time to fully cook any batter type of recipe.

Most 'cake' batters require 1 hour of cooking at 350F or higher. With a Solar Oven, you should probably leave that recipe in the oven at least 3 hours (at 250F) and possibly longer.

Unfortunately, if you leave a cake in the sun that long...the top can scorch, but tightly covering a batter won’t allow the steam to escape and will result in gooey, soggy cakes.

Consequentially, I have had better results with pastry baking, when I use Quick Bread recipes such as Coffee Cakes (US term), Biscuits (the fluffy breakfast roll- not the sweet treat eaten at tea time), muffins, ginger bread, brownies or corn bread.

Quick breads usually need only 20-30 minutes of baking time in a traditional oven at 350-400F. In a Solar Oven at 250F, my best results have been to cook Quick Bread recipes 2 hours, not the 3-4 hours that a thin, runny cake batter would need.

Thin, runny batters have a higher water content, and will create steam inside a Solar Oven, that fogs up the glazing glass... which will reduce the temperature inside the oven. In Summer time with intense solar radiation... foggy glazers isn't such a bad thing, since it helps to prevent the tops of cakes from scorching... but it does lengthen the cooking time.

If experience shows that your favorite recipe needs 3 or more hours to fully cook, you will need to cover the top of the recipe about half way through the cook time. I recommend a Black Camping plate, since it will fit loosely over the recipe, and allow the steam to escape; as well as, the black surface radiating IR heat back onto the top of the cake, continuing the cooking process.

All experienced Solar Cooks recommend using shallow tins when you bake. This allows the Conductive Heat to reach the center of the cake quicker, so your cook times are reduced.

Baking is tricky business in a traditional oven, so don’t feel badly if your first efforts with a solar oven do not turn out perfectly. Experiment with several different types of batters to discover what works best for your area.

FoodNetwork.com has an extensive database of high quality recipes. Do a Search for Quick Bread Recipes, Muffins, Coffee Cakes, Ginger Bread, Muffins, Brownies and Biscuits to find new recipes to try in your solar oven.
Posted by ARNie at 12:26 PM 1 comment:

With solar cooking, it isn't the ambient air temperature that we use to cook with; it is the intesity of the solar light and radiation hitting the earth.

This is a satellite photo that measures IR.
http://adds.aviationweather.gov/satellite/displaySat.php?region=US&isingle=mult_big&itype=irbw

You might have to copy and paste the URL for this link.
Posted by ARNie at 6:56 AM No comments: 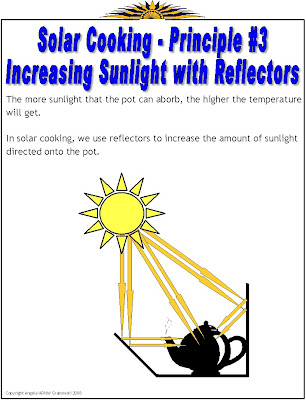 I offer this poster free for anyone who wants to teach solar cooking to others. The graphics are very simple, so I don't mind if you would like to use this as a template and create your own poster.
I do ask that you keep my copyright statement on the page, if you use this poster.
Posted by ARNie at 7:53 AM No comments: 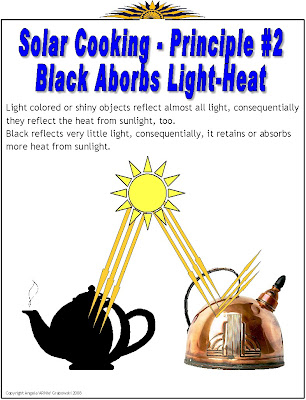 I offer this poster free for anyone who wants to teach solar cooking to others. The graphics are very simple, so I don't mind if you would like to use this as a template and create your own poster.
I do ask that you keep my copyright statement on the page, if you use this poster.
Posted by ARNie at 7:50 AM No comments: 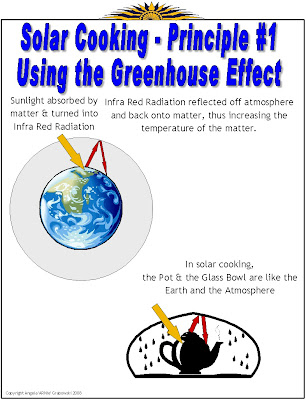 I offer this poster free for anyone who wants to teach solar cooking to others. The graphics are very simple, so I don't mind if you would like to use this as a template and create your own poster.
I do ask that you keep my copyright statement on the page, if you use this poster.
Posted by ARNie at 7:38 AM 1 comment:

We had a wonderful turn out for this fair; and to my delight, there were lots of folks who had already heard of solar cooking, but they didn't have enough information to seriously consider doing this on a full scale.

I had several Girl Scout leaders who were so excited to see this in such a large operation, or some had seen this done at training seminars but in really small cookers. All the scout leaders were already planning how to incorporate this into their meetings. Some of the leaders were even considering having me come to do seminars for them.

Several home school families were there and thrilled with the science that could be taught from the soda bottle pasteurization unit. One 10 year old boy had already tried to build a solar oven, but did not achieve the temperatures he knew should be there... so I talked to him and his parents on ways to improve his cookers and ovens.

Of course, there were folks who were stunned at the notion, and amazed at the fact I saved between $50-$75 a month off my electric bill this summer just by cooking outside.

Yes, it was a truly wonderful day, and I had a great time. I will do this again next year at the Eco Fair, and any other opportunity I get.
Posted by ARNie at 7:24 AM No comments: